Create your own perfect home and choose your layout, spec, and style

Shepherdess walk has been shortlisted for the prestigious Mies Van Der Rohe Award. It is the result of a collaboration between Jaccaud Zein, award-winning Swiss architects, and Solidspace, multi-award winning London based developer. Located between Old Street and Islington, the Hackney Design Award winning scheme comprises of 5 apartments and 3 terraced houses, all of which are incorporated with the distinctive Solidspace DNA. The split-level configuration allows for visual connectivity within the interior of the house, and natural light floods into the homes.

The project is site-specific, complementing its Victorian neighbours in both scale and the materials used. Details have been meticulously planned, from the Belgian bricks to the rendered plastered beeswax finish of the interior walls. What was once home to UK’s first HIV clinic, has now been transformed to a series of homes that have a distinctive character yet contain all the comforts of a modern house.

Solidspace is an independent developer, founded by architect Roger Zogolovitch, that produces bespoke, site-specific and meticulously designed projects. Working on small hidden sites, Solidspace unlocks the potential of these spaces, many of which are overlooked, to create homes that are customised for the inhabitants, yet embrace their locale.

All of their developments are driven by light, volume and character, which is why it employs the unique Solidspace DNA, their trademark design. The Solidspace concept allows space for living, eating and sleeping over an open series of half levels. It was designed to make full use of both volume and light, which in turn, produces spacious, atmospheric homes that are flooded with natural light by taking out unnecessary walls. By employing half levels, the stairs double up as corridors, creating a double-height void.

Solidspace believes that it is small and medium-sized developments that will make a difference to cities today. They are campaigning for the recognition of independent developments where architects, self-builders and small developers should be given the opportunity and freedom to design creatively.

Jaccaud Zein Architects was established as a collaboration between Jean-Paul Jaccaud and Tanya Zein.

With an unfaltering allure for interventions in complex built environments with strong individuality, their projects utilise context to provide sensitive and customised responses. The definition of atmosphere, and the sense of place is also heavily emphasised.

Physical and emotional properties of construction as well as materials are an essential part of their projects. In addition to their comprehensive knowledge of housing, the architects are continuously looking for modes of inhabitation customised to the contemporary lifestyle whilst still leaving space for character.

1. Awarded first prize for RIBA International Award (in partnership with Sergison Bates Architects) for an urban housing and crèche in Geneva.

2. Shepherdess walk was shortlisted for the biennial Mies van der Rohe Award 2017, the most prestigious prize in European architecture.

3. Shepherdess walk was shortlisted for a RIBA award in 2016.

AZ Urban Studio led the way for the preparation and submission of a full planning application, which resulted in a redevelopment of a dilapidated building on Shepherdess Walk, adjacent to the conservation area. They shouldered all negotiations with the Local Authority, and obtained planning permission from the London Borough of Hackney in February 2013. In addition, AZ Urban Studio provided townscape and heritage consultancy into the Design and Access statement.

Jaccaud Zein Architects also played an important role by producing a creative design that responded to the sensitive context of the site by reinterpreting the Georgian town house. This new arrangement maximises the volume of the development whilst reducing the impact to the surroundings.

Hackney has undergone tremendous changes at a fast pace, and has recently nudged its way into the Sunday Times Best Places to Live in Britain guide. This was a major turnaround, considering less than 10 years ago, it was ranked as the worst place to live in Britain. The rejuvenation of buildings in this area has generated a new buzz in the town centre, and with more openings in the pipeline, it only suggests that these improvements will continue. The arrival of the 2012 Olympics has also bestowed on the borough outstanding transport links, improved housing and new schools. Hackney also has wonderful architecture and a myriad of open spaces and local characters.

Aside from being one of the best places to live in Britain, Hackney is also London’s greenest boroughs. With its boating lake and children’s play areas, Victoria Park is a prominent attraction. It is home to various local festivals as well as Lovebox and Field Day and is a perfect location for a quiet picnic. Other green spaces include London Fields, which is known for its wildflower meadow, and Hackney Marshes, which will definitely make you feel as though you’re out of London.

Tube It is only 20 minutes from Hackney Central to Oxford Street via the Victoria Line at Highbury and Islington, 17 minutes to Shoreditch and 16 mins to London Bridge via Northern Line.

Train Hackney Downs is on the East Anglia Line, and this route will get you to Liverpool Street in eight minutes.

Bike More people cycle to work here than any other place in the Capital, pleasant cycle routes via the canal and parks get you where you need to go in no time.

“It is hard to convey the lyrical spatial effect of the split section that allows one volume to interplay across three levels, between ‘work’, ‘live’, and ‘eat’. There is a kinetic sense of space between these semi public rooms…the flats promote an extraordinary sensation of interconnectivity that is freighted with potential, allowing glimpses down to a living space or up to a galleried work space.

One senses the tradition of ‘Das Englische Haus’ here, a continuity with the Arts & Crafts tradition that connects the occupant to specificity, craft and choreographed social interaction, in a manner missing from many modern homes.

…It’s not often that something emerges in the field of housing that asks as many questions as it answers. Here one finds the promise that if the boundaries within which architects work in housing are pushed and redefined, something more appropriate to today’s way of life can be created.”

“The arrangement also makes movement through the houses and apartments into imaginative journeys, with continuously changing shapes and proportions, falls of light, relationships of one room or level to another, and of interior to external terraces and balconies and to views of surroundings or of the sky. It considers inhabitation to be something done in different ways in different places, and at different times of day.”

Shepherdess Walk has also featured in Wallpaper*, Uncube, the Architect’s Journal and the Financial Times among others. 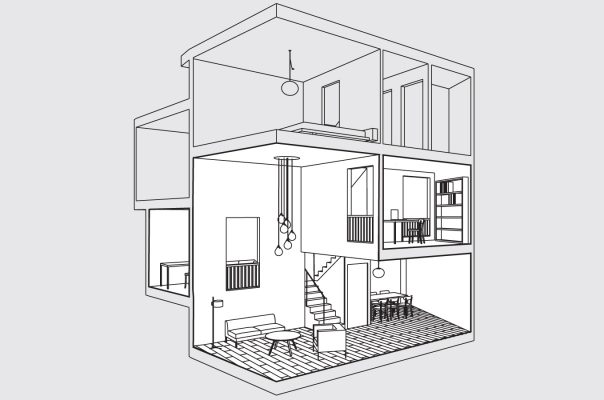