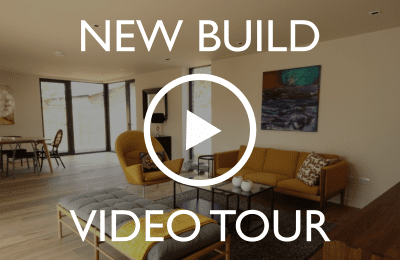 Hi, it’s Gus Zogolovitch, and I’m the founder of Rare Space. We’re a design led estate agency trying to find you some of the best houses in London.

Today we’re touring a beautiful new house in Streatham. You can see Streatham Common stretching for a number of acres, next to the park on a very interesting road, full of late 19th century early 20th century housing up and down. 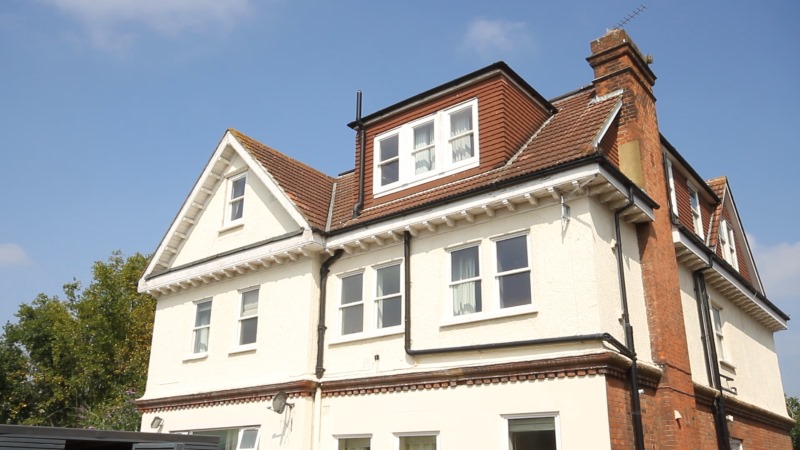 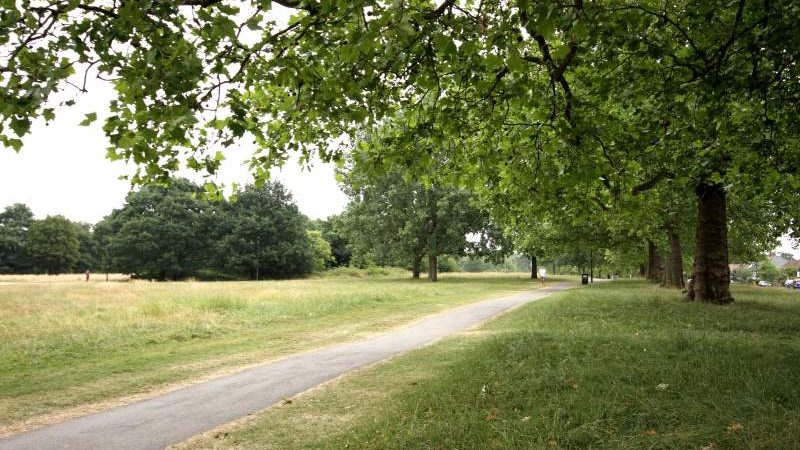 The story of this site is that originally it was some garages. It was pretty traditional for these big houses at the front to have garages, which eventually fell into disrepair and disuse.

Fundamentally, how many garages do we need these days? And we’re so desperately short of housing and new housing for families that getting rid of some garages and replacing them with places where people can live is surely the right way to go. So I’m all for that.

It’s a development of 2 houses, I’m going to review House 2 which is a 4 bedroom house, with the bedrooms in the basement and the living room and the kitchen upstairs. Let’s go inside and take a look.

This a pretty generous hallway. Some very nice large scale tiles, and lovely top lit roof light which lights the stair. There’s some interesting storage here which has a very nice design with a cut out and some laminated timer where you can put your coat. Very helpful, always, to have somewhere to put your coat as you come in, something my wife always complains about.

There’s also a nice little bathroom, generous with a nice little light. And some frosted windows to make sure no one can see you when you go to the toilet.

Here we are in the sitting room, and I think what’s really lovely about this is the number of windows. And not just any old windows, you’ve got windows that go from the floor to the ceiling.

There’s a nice little garden going out, and then you’ve got this very large picture frame down onto the lower bedrooms.

It’s a very generous space. It’s got plenty of space for a table, or if you’re like me and you’ve got loads and loads of stuff, you can put a built in wardrobe on the side.

There’s under-floor heating which is going to be heating this space, under an oak plank, a very nice oak plank floor.

The kitchen is off to the side of the dining room, in a beautiful shade of grey. They’ve really made use of every available square inch of space.

And something that is very helpful for any family: you’ve got an enormous fridge, top to bottom, and an enormous freezer. And I can tell you in my family that gets filled up very quickly. 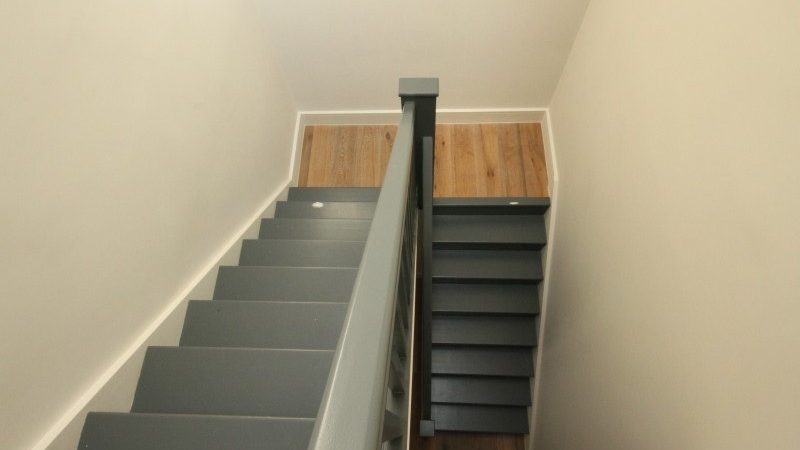 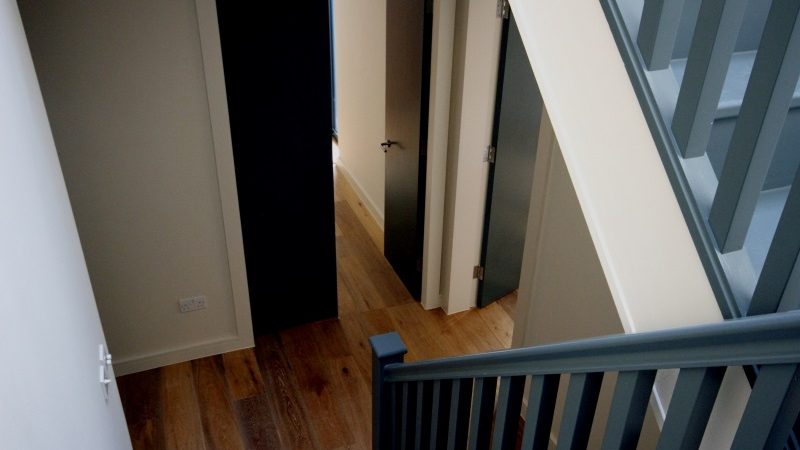 We’re now actually in the basement level, and this is very typical of a London gap site. Generally there isn’t much land left over. And whenever I say to anyone I’m interested in developing and doing all sorts of stuff around property development in London, the first question they always ask is where’s the land? How the hell do you get the land?

There is land around, but often it’s brown field or it’s left over. So this site was originally garages as I mentioned before. But the problem is that these garages are generally quite low. As you can imagine, you don’t get very many two story garages anymore.

What also happens is they tend to be behind houses, in between the backs of houses, so most of the time you can’t really build higher than the original roofline of the garage.

So if you want any decent amount of accommodation, you’ve got to build into the basement, and that’s where we are. Now the biggest problem: is how do you get light?

What the developers CLPD have done, very cleverly, is create a kind of atrium or courtyard effect to enable all of the bedrooms to get light. 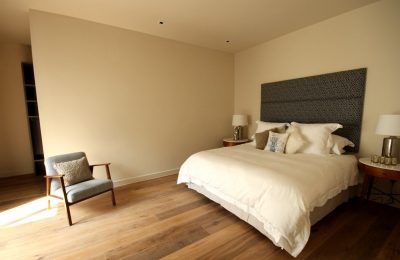 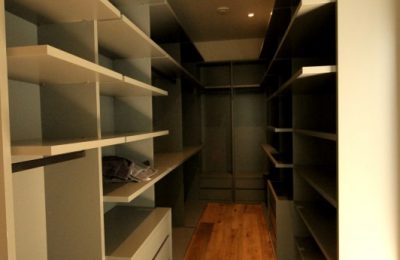 So here we are in the master bedroom, a very generous bedroom size. Some interesting detailing around the skirting board, and a nice architrave, nice chunky size, not pretending it doesn’t exist. 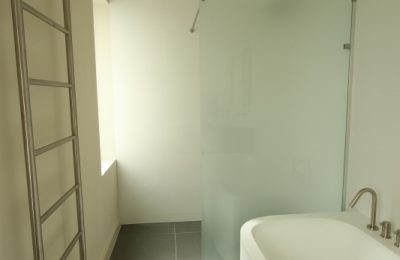 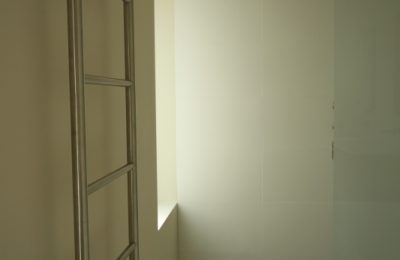 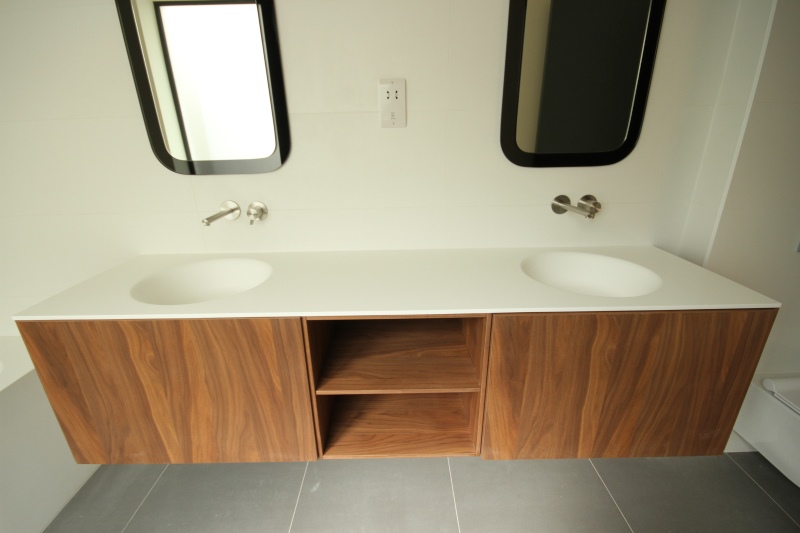 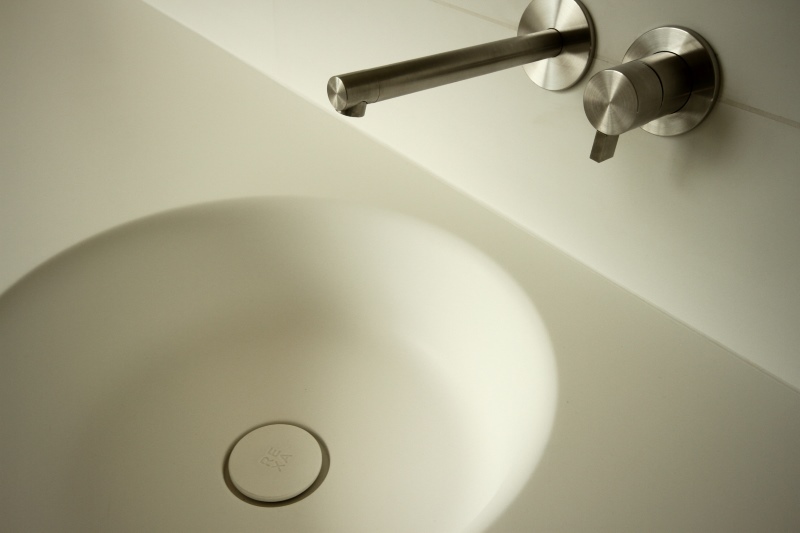 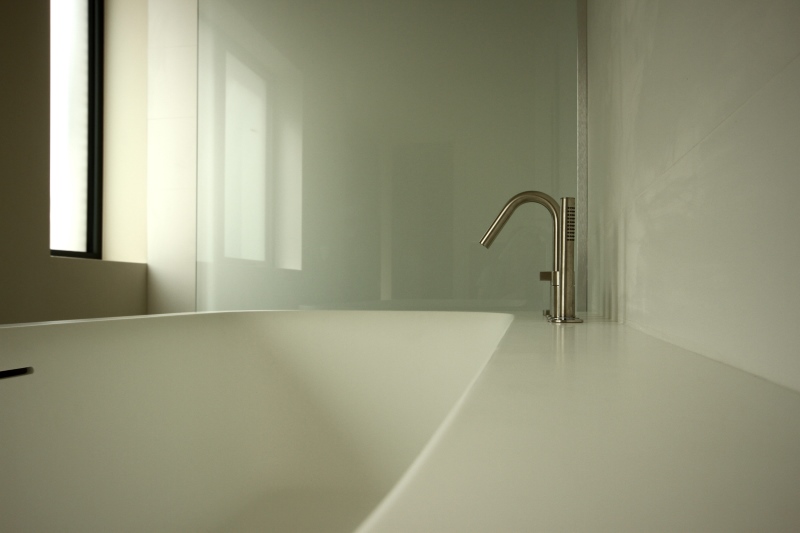 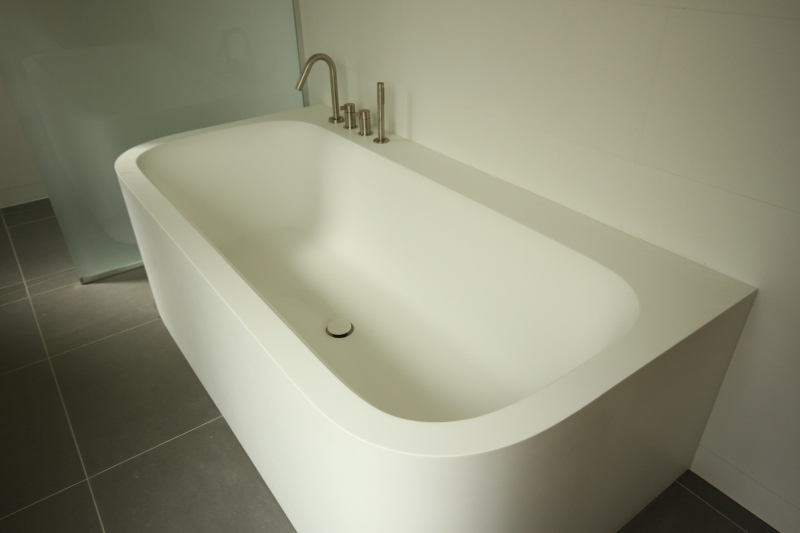 Some lovely tiles, and a beautiful his and hers sink, or his and his, or hers and hers, depending on which way you roll.

Now we’re here in what I would probably call the family bathroom. Again some really beautifully chosen tiles, some nice big step tiles there. I particularly like the wall tiles, these are fab, they’re sort of a take on the classic mosaic tile. Very elegantly put together. 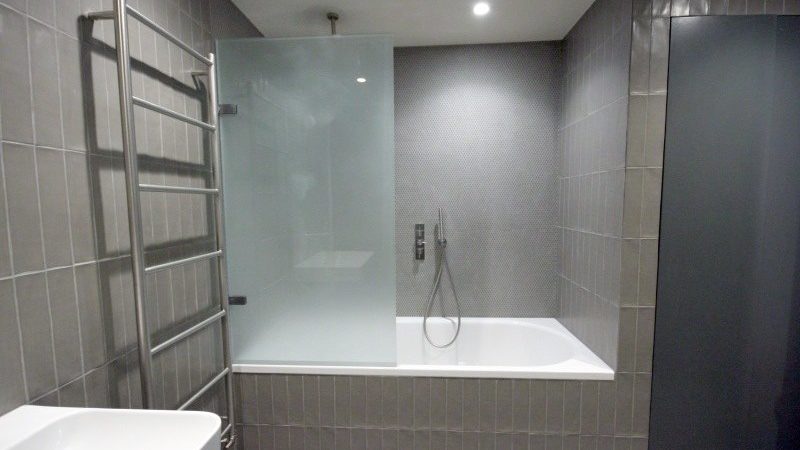 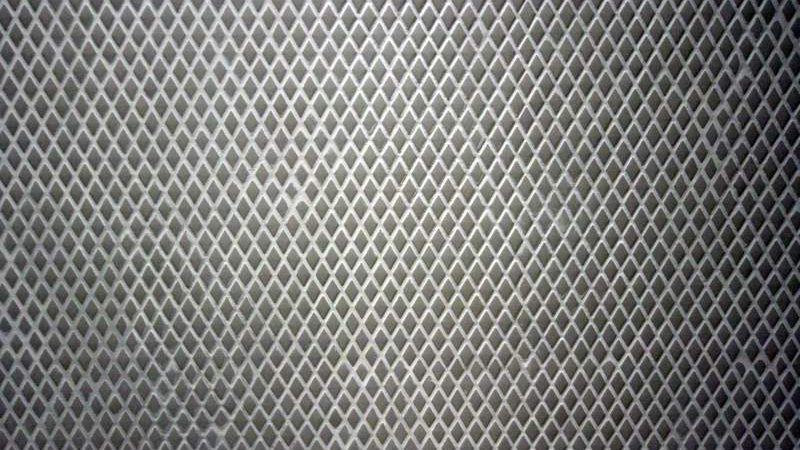 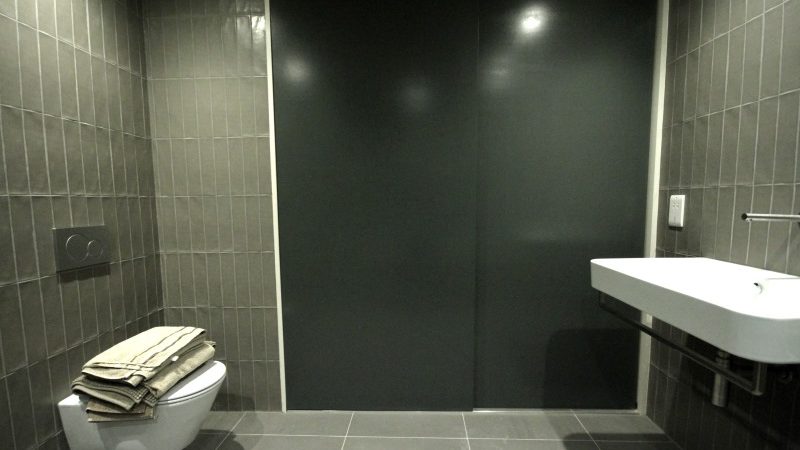 Behind those doors, if you slide them open they reveal my pet geek, which is all the utility stuff.

You’ve got a hot water tank, you’ve got solar, you’ve got your underfloor heating, and what looks like a mechanical heat and ventilation recovery unit, which I’ve got in my house, and they’re actually brilliant.

What they do is they allow you to keep all the doors shut and it continuously brings in fresh air. And the fresh air is great during the summer, but in the winter, you don’t want fresh air that’s maybe minus 5 degrees, so it actually takes the old hot air from your house, extracts that, and heats the new fresh air with the heat, so it passes by a heat exchanger. It’s really clever. Keeps the house very efficient, keeps your bills low. 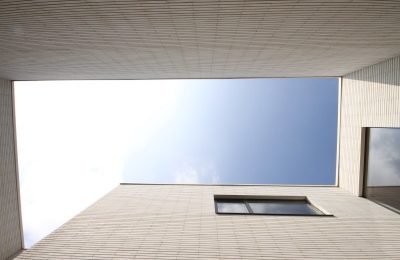 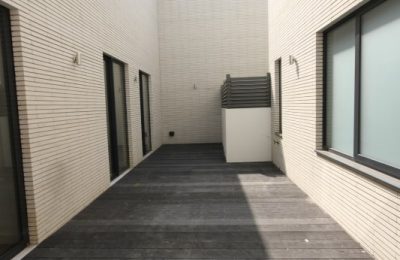 Here in the courtyard, even though we’re one level below the ground level, you can still see there’s plenty of light, plenty of sun. And it’s a very nice little place to escape from it, it’s not too hot down here. And when the weather gets really crazy as it does sometimes in the summer, getting away from the heat is probably not such a bad thing.

What they’ve done very cleverly also is picked up on a kind of whiter brick to allow the light to reflect and to make sure you maximise the light down here, which is naturally going to be slightly darker. I think they’ve done a great job.

Thank you very much for coming with me on this little tour, and I hope you enjoyed what you saw. We always love to hear your thoughts, so leave a comment below!

Watch our other video tours here 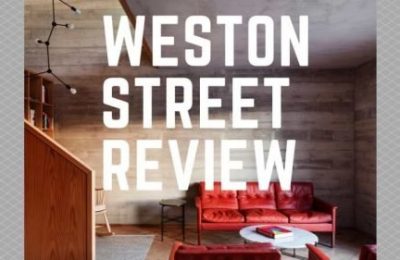 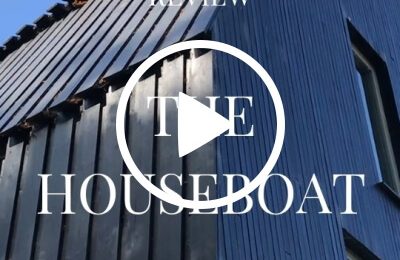