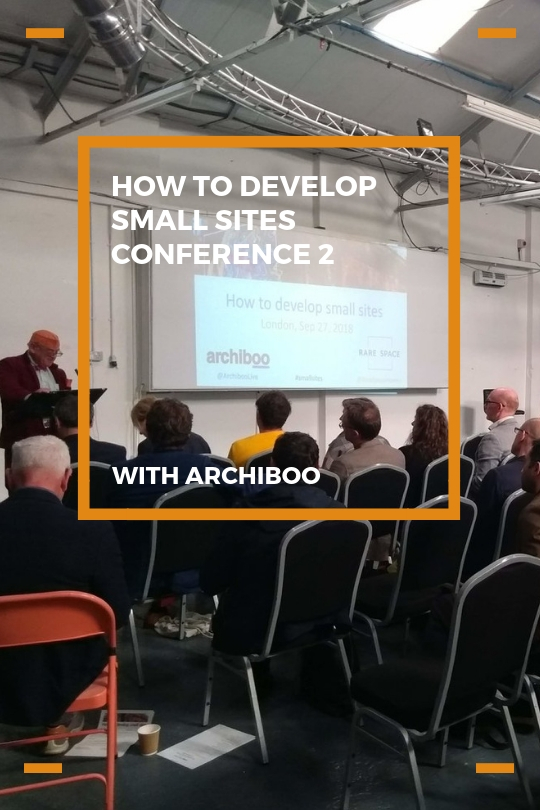 Posted at 13:31h in Events by Rare Space 0 Comments

How to develop small sites 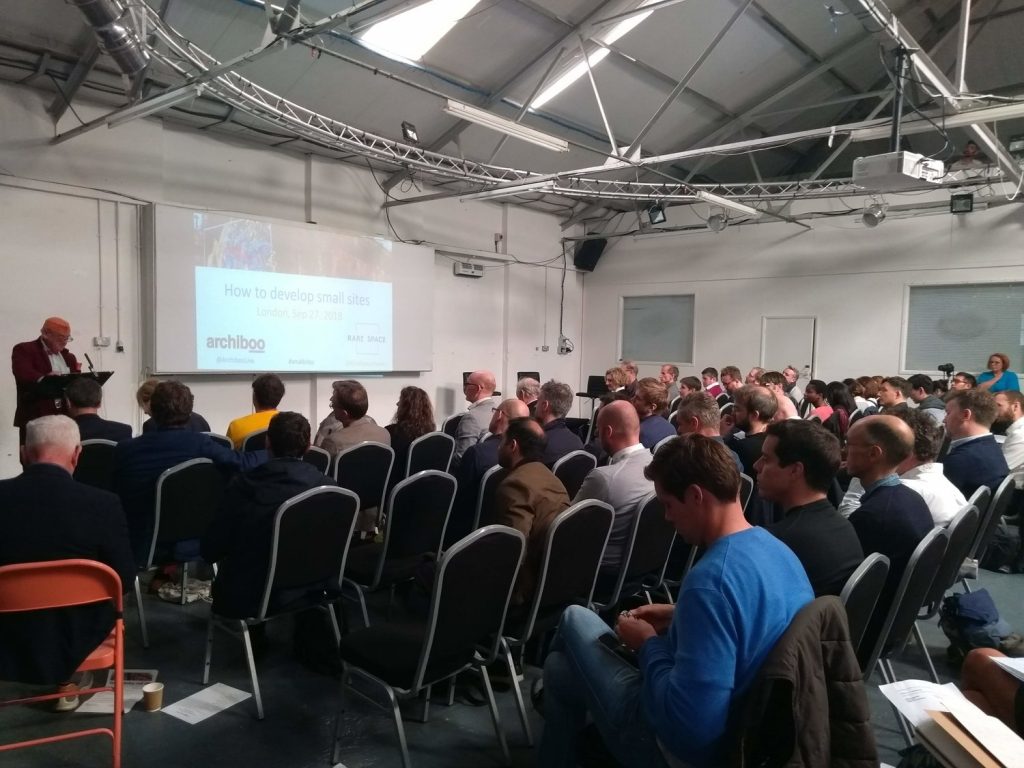 If you are an architect or someone who is interested in becoming a property developer, it’s difficult to know where to start and who to talk to.

There are plenty of opportunities out there – as Colm Lacey, of Brick by Brick, the Croydon private developer said, “architects are pretty much the only people who can develop these sites. Berkeley Homes aren’t going to do it. Barratt’s aren’t going to do it, so don’t stop and don’t be afraid of going at it. There will be challenges along the way but it’s not necessarily a challenge you won’t be able to solve.”

The second conference on how to develop small sites looked at the holistic mix of skills needed to undertake a development and what other factors should be understood, such as winning the trust of local communities to make projects viable.

The agenda was designed to respond to the prevailing economic climate and the shifts in the property market that are opening up new opportunities for independent developers.

Major housebuilders face an increasing challenge from the growing number of successful ‘community-led’ independent developers where profit is not king.

That was the mood among 100 delegates at the second ‘How to Develop Small Sites’ conference in London this week, organised by Archiboo and Rare Space. After hearing “the heroic stories” from one small-scale developer after another, the counter message to conventional routes to market was robustly summed up by legendary ‘alternative’ developer Eric Reynolds, pioneer of Camden Lock, Spitalfields and Trinity Buoy Wharf, who told delegates: “Do it lighter, do it quicker – get it done.”

He singled out local councils for special mention “they have no idea of the value of time. I’m 75 and I am still saying I’ll be dead before you finish it,” he quipped. 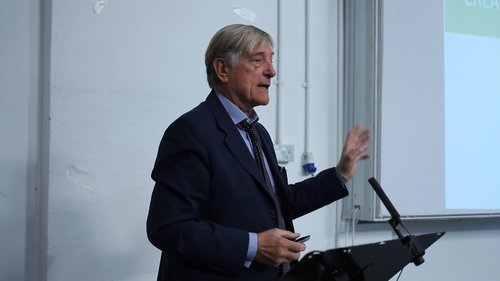 He recalled how he bought Trinity Buoy Wharf for £100 – which he may “never have paid” – after persuading the Treasury that he’d formed a Trust, how he’d paid £70,000 for Camden Lock when there were plans to build a motorway over it but today had just been sold for £460m and how the cash flow from the Lock had secured a deal with David Sainsbury to build a superstore further along the canal.

There followed a series of inspiring stories of ‘accidental developers’ who found themselves forced into a fight – but are coming out on top.

In the session ‘Why be a developer’, Christian Spencer Davies of AMODELS, a founding member of the Camley Street Community Project behind King’s Cross, with plans to create hundreds of new homes for local people, explained how he had become a developer because his offices were being threatened by a developer.

“So, me and the neighbours conspired to come up with a way of staying put.” At the same time, they had a dual focus of employment, adding to the existing 500 jobs in the area, because “industry is the real organism of London.”

The project was feasible because “there is a strong desire out there to do something good.” However, he admitted that it was “really hard working with local authorities because people keep changing and most of the time you have no idea of who you are talking to”.

Former finance officer Tony Wood told how he had become “an accidental developer” when his health authority in Haringey, north London, decided to offer two-thirds of a local hospital, St Ann’s to a private developer for 470 homes – none of them affordable. 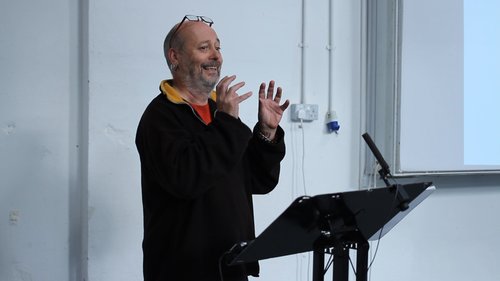 “Like Camley Street, we got to where we are out of necessity,” said Tony, recalling they had to have “a whip-round” to pay for the campaign’s first meeting. They formed the St. Ann’s Redevelopment Trust, and set about buying the site. “But how the hell do we do that? We had no skills, so we went to everybody we knew. We found there were so many brilliant people out there in your profession – developers, architects, planners, financiers prepared to give their free time and support. But it was a huge learning curve – and we started from knowing nothing.”

Following an online community survey and a crowd-sourcing appeal raising £25,000, the group finally persuaded the GLA to buy the site, with a condition for 50% affordable housing but with a higher density of 800 homes agreed by local consultation.  The architects are Maccreanor Lavington and 6a.“There’s a lot of money out there”, he told delegates. “People are trying to lend money to community housing projects. But you have to have broad shoulders and it’s been pretty time consuming – about 150 hours a week all voluntary. But we got there.”

Another community-led development narrative came from Maria Brenton, senior ambassador for the UK Co-Housing Group. “I did not start as a developer”, explained Maria who has worked with Older Women’s Co-Housing group (OWCH) for 20 years. “I work with small groups who want their own housing developments – and there are many, many throughout the land, who are looking for not just housing, but housing with social connectiveness.

“I guess that’s what is meant by the jargon ‘place-making’. For older people, housing that “fostered social connectiveness with neighbours so they feel more secure and happier – loneliness is a huge issue now,” was important, an award-winning example being a successful project in Barnet, which was providing 25 homes for people aged between 52 and 90.

Another developer who “started with no capital whatsoever” was Neil Murphy, a former senior policy advisor at the Treasury, who spoke about TOWN, a pioneering community-led housing group whose motto was “Profit for Purpose”. Set up four years ago, TOWN’s first project to go live is at Marmalade Lane, a 42-home co-housing development designed by Mole Architects with land bought from Cambridge City Council on generous build-now-pay-later terms in a joint venture with financial-backers Swedish housebuilder Trivshus.

“Investors usually want a track record, with some evidence of ‘skin in the game,” said Neil. “But if you don’t have capital, leverage your skills, leverage your position. And go for projects with an angle to them, a niche or a purpose.”

On a different scale, TfL  with 5,700 acres of land was “a property company whether we liked it or not – but we didn’t behave like one,” admitted Head of Housing Strategy, Robbie Erbmann.

The original staff of five had expanded to 80 in five years, he said, prompted by the prioritisation of housing by the Mayor, with a current target of delivering 10,000 new homes by 2021, half of them affordable, generating a “means of revenue for TfL, but also “because we want to leave a legacy of housing development.”

The emphasis on its small sites programme begun two years with a trawl through the first 1,000 TfL-owned sites then whittled down to 10, scheduled to produce 160 new homes, 66 percent of which would be affordable. “But it’s not easy – we have 160 people working on ten sites, the same number as if it were 1,000 homes,” said Robbie, who was in the process of appointing a Director of Estate Management.

The first 10 sites sold to “the highest bidder”, auctions had been resisted because “we wouldn’t get the most innovative people”, he told delegates adding that while data on plot values were “commercially sensitive’, details of “what went on with each site would be made public.”

John Smart of Craftworks said he’d “rather cannibalise myself” by becoming an architect/developer than wait for developers to take him over. “It was a conscious decision to reposition ourselves into developers but a new skill set was needed. It became full time – we needed to learn about investment, about planning, about how to mix concrete, to look at the Land Registry and to have an exit plan. But if you dive deep you can find the pearls,” said John who now employs six people finding small sites.

“They are taking on projects which are way beyond my abilities – but there is something heroic in them. ‘We really didn’t know what we were getting into to. We didn’t take a course in it, we didn’t have a PhD in it, we didn’t have a CPD in it, we just entered it with a blind belief that we could get there’ ”he said referring to Hari (Phillips), Maria ( Brenton) and Tony (Wood).

And rather like actors who went onto to become film-makers, architects who were “so used to being dealt with as – ‘never mind you Mr Architect – we’ve got project managers, we’ve got fund managers, everybody knows better than you’,” were seizing the time.

“What is enormously exciting about the stories you have heard this morning is that we have got the chance to develop our own futures – and that’s what’s so brilliant about this conference because it’s helping you as architects believe you can do that.”

Pre-register for our Masterclasses

Sign up with your email address to receive news and updates about future events such as the Masterclasses on how to be an Independent developer. These classes will go into more depth on such topics as How to fund a development, legals, and finding land and doing appraisals.

Robbie Erbmann is Head of Housing Strategy at TfL. His previous roles have included working as Special Advisor at the Cabinet Office as well as senior advisor roles to both Tessa Jowell and Ken Livingstone.

Eric Reynolds has been involved in dozens of urban regeneration schemes including Camden Lock and Spitalfields Market. At Trinity Buoy Wharf, he pioneered the idea of converting shipping containers into building while developing the site for arts and creative activity.

John Smart is the director of Craftworks that encompasses architecture, development and construction.

Steve Chance is a founding partner of Chance de Silva that has developed several sites- all on derelict or blighted land. It’s most recent project is a fluted concrete house called Vex.

Sam Jacob is principal of Sam Jacob Studio whose work spans urban design through architecture, design, art and curatorial projects. He is developing a new mixed use building in Hoxton, east London.

Mary Riley works with lending institutions on funding for residential regeneration projects, with a particular interest in ‘Green mortgages’.

Tanya Kalina is a co-founder and director of MBBK Developments, an architect-led development company and a partner of McAdam Architects.

Maria Brenton is a leading expert and advocate for cohousing and worked with the OWCH (Older Women’s Cohousing) Group to help establish the only senior cohousing community in the UK.

Neil Murphy is director of TOWN focusing on getting proper urbanism through planning. He was previously economic advisor to Newcastle City Council.

Olivia Reynolds is founder and director of Berlin-based development company Lobe that recently completed an arts building in the city.

Amin Taha is chairman of GROUPWORK, an employee ownership trust to allow architects and other disciplines to collaborate withing a long-term and open structure.

Marion Waller is the lead advisor on the Réinventer Paris and an advisor to Jean-Louis Missika, Deputy Mayor in charge of Urban Planning, Architecture, Attractiveness, Economic Development and the Greater Paris Projects.

Roger Zogolovitch is a developer and the creative director of Solidspace exploring new typologies of housing.

Hari Phillips is director of Bell Phillips Architects that has recently completed Marklake Court, a new build housing scheme working with local residents from the outset.

Richard Brattle is a chartered accountant with Robinsons Accountants, an Old Street mainstay, which has a strong pedigree in helping entrepreneurial start-ups with an emphasis on property-related businesses.

Pat Hayes is Managing Director of Be First, an urban regeneration company wholly owned by Barking and Dagenham Council. The company aims to deliver 50,000 new homes and 20,000 jobs in the next 20 years.

Sorry, the comment form is closed at this time.